Afraid of heights on Golden Gate 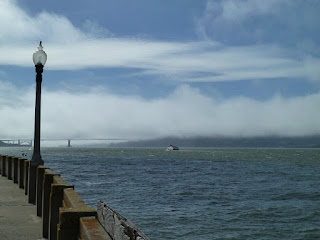 Sunday, our second day. As stated below, we decided to cycle to the bridge. First we took the bus from Castro to Marina. It took ages.

Then we headed from Marina to the Blazing Saddles bike rental. By this time, little Miss ”Sunshine” Heinämaa was feeling nauseous & thirsty and Orvokki was complaining about how boring the street was, ”nothing to see, Castro was so nice”. So it was like walking with two whining teenagers! Luckily we found Lori’s Diner and after a burger and beer the teenagers had disappeared and we finally went to rent the bikes. 🙂

We cycled along the beach and harbour to Crizzy Park next to the Golden Gate bridge. The hard wind was against us and it was a bit foggy, so we could only see the lower parts of the bridge. Nevertheless, Miss H and I decided to ride up to the bridge ”now that we are here”, whereas Orvokki decided to stay on the beach level.

Okay. We’re both afraid of heights. It was a hard wind. And it was indeed a bit dagen efter. Not to mention being shocked by the ”truly Finnish” results in the elections back home! 🙂 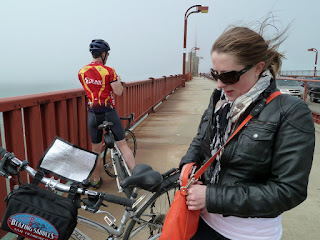 ”Oh s**t this is high…”
”Iiik, this bridge is shaking all the time. Can you feel it?”
”Quick, grab the camera!”
”Damn!! There goes my camera minigrip! Blown away!” 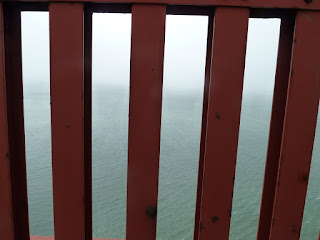 ”I’ll just take a pic, whatever. Give me your iPhone, I can take a photo of you and then you can take one of me, ok?”
”Yeah, but how does this work. Damn… I cannot see anything…”
”S**t this wind is scary, just press the button!” 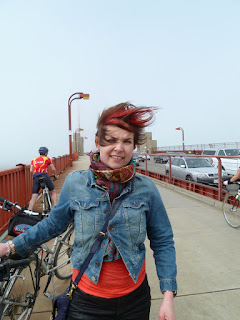 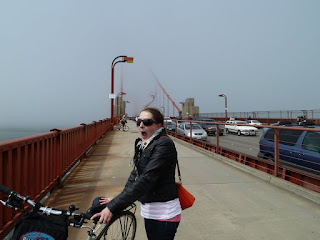 ”Now let’s get out of here!”
(Meanwhile some other cyclists were just passing us by without a sign of panic. 🙂

Afterwards we just laughed at ourselves. If you are afraid of heights, why the heck do you go to Golden Gate, especially on a windy day?!

Well, we felt almost heroic when we rolled down the hill to the beach café. We met Orvokki and continued back to Fisherman’s Wharf. Enjoying the wind that was pushing us. 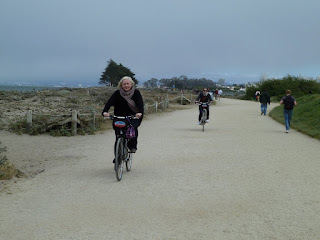 ”Now we deserve at least a glass of complimentary wine.”
Despite the cranky and scary moments, it had been a nice day.
We got a little tanned, too! 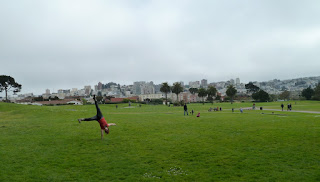 Finally, some cartwheels on the lawn near Fort Mason, as in every travel destination.
So childish, so great.
”If you were Amelie on that movie, this would be your garden dwarf”, said Orvokki.

”Thelma and Louise didn’t have a GPS either!” →