Do you know the feeling when you seconds too late realise what you should have said — and then spend the rest of the day wondering, why you didn’t react faster? I had one of those moments yesterday, when we were shopping in Santa Barbara.

I was on my way to the car sipping a smoothie, carrying a couple of shopping bags and my faithful Mulberry Alexa handbag. I overheard some people speaking Swedish behind my back. They were in their 25’s, a couple of girls and boys. One of the girls said as they passed me: ”Can you understand that the bag that chick is carrying costs like 9000 Swedish crowns?” I suddenly woke up – they were talking about me. I was just turning left to another street when I heard the guy reply: ”Yeh, sure, but that bag is not genuine, it must be a replica. ” In Swedish of course. It took two seconds too long time for his words to sink in, and the moment had passed. I just stood there and blamed myself for not replying – in Swedish – that indeed my bag was real, I had worked wery hard to get the money for it, and no Swedish brat should be telling me if it’s genuine or not. But it was too late.

I got to think about my bag a bit more. I bought it last Easter in Manchester, it’s called Mulberry Alexa Blueberry Ink and it was expensive, yes. But it has saved me from buying many nice handbags ever since.

I just look at the other bags and ask myself, if I would prefer that bag or Alexa in the morning when going to work or out. And the answer is usually Alexa. You could say that we have a very good and stable relationship. Ha-ha! 🙂 It’s also off the stock at Mulberry’s, so it’s almost unique.

Sure you don’t believe me. But take a look at the photo below. It features all the Coach bags that have been purchased during the trip. 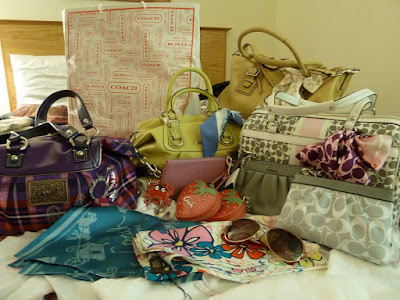 NONE of these handbags is mine. (Even despite the Coach Factory sale yesterday, with an additional 30% discount)
Proves my point, right? 😉

P.P.S. Okay, I have bought one. It’s a Michael Kors weekend bag. But that’s not a handbag…