Travelling with the girls

Yesterday, at 7 am in the Helsinki airport, we were standing outside the terminal and enjoying the sunny morning in Finland. The trip hadn’t even started. Despite that we all had a bit of a headache from the first holiday drinks that we had had the night before at GLO hotel. Miss H, trying to light a cigarette, couldn’t find her lighters and I had forgotten my earplugs and there was lots of hectic discussion.

“Well, it feels like I have already been travelling with you for at least a week”, laughed Orvokki.

We have our past in travelling. We all like sights, shopping, good food, wine, culture and meeting new people. This needs to be in balance – a holiday is not all about drinking or all about culture and museums. And we are not too private (sharing a double bed or fitting four persons in one room is not a problem). That’s probably the reason why we’ve travelled together for 10 years.

As we are now starting our trip in California, here’s a short introduction of us (that offered us something to do between London and San Francisco yesterday :))

Orvokki is the cynical romantic. “Yeah, love is a wonderful thing, but so fucking hard!”. But really, she is the most mature of us and would most unlikely lose her cool. She was the first person I called for a fag-hag.

A memorable travel moment from the past: When we found our favourite restaurant Sanctuary T in New York. “It has become a safe haven in NYC” (And the waiter is cute.)

Looking forward the most: Sunset at Grand Canyon and the seaside hotel in Santa Barbara.

Miss Heinämaa is everything from the pope of the universe to a general mascot. Works hard and relaxes even harder. Sometimes she needs to be taken care of, but in return, we get a lot of entertainment. It’s a fair deal.

A comment you hear often: “Should we just sit down to a café and have a glass of wine? I can pay.”

A memorable travel moment from the past: Late afternoon in the Churchill’s Arms pub in Kensington, London September 2009. “The best Irish coffees ever and reasonably priced champagne.”

We know she hates when travelling with us: Loose hair! In the sink, in the shower, everywhere!

Looking forward the most: Las Vegas! “The suite and the Hangover the movie type of dagen efter…”

I, Laura am effective but impatient. I used to be the tour leader but I’m not so sure about my position anymore. (Especially now, as two days ago I realized that I had forgotten to book the flight tickets from Stockholm to Helsinki. I’ve heard a lot of comments about that…). I like to do research before hitting the road, so that we can avoid the tourist traps and find something genuine. I think I’m quite a lot of fun, though. At least they pretend they laugh with me, not at me… 🙂

I comment you hear often: “Hey, I looked at the map and read some reviews, so what if we go to…”

They know I hate when travelling: My fellow travelers’ occasional need to talk about how well or badly their stomach works. “Not interested!” And the trains or buses that don’t come on time…

A memorable travel moment from the past: We took a train from Manchester to Aberystwyth in 2006 but there were no light refreshments on board! During a train change in Shewsbury we found an off-licence pub with a poster of Steve McQueen on the wall, bought some ciders – and realized in the train that we did not carry any bottle openers. It ended up with me & Miss H bleeding (while Orvokki was photographing a supposedly dead cow from the train window). We quenched our thirst, nevermind the blood stains on the Strongbow bottles.

Looking forward the most: Thelma & Louise feeling on the road. “So, it’ll be riding the mules over the canyon edge”, laughs Miss H as I write this.

Then there is the fourth member, Annikki, who is always eager to analyse things, which means that we get plenty of vivid discussions. And all the guys fall for her beauty. Sad that she couldn’t join us this time.

The first morning in San Francisco

It’s 9.00 am and we have been sleeping for almost 13 hours. We were so exhausted after 24 hours of staying awake, that we probably looked like as if we were on drugs when we passed the complimentary wine serving and other hotel guests at 6 pm on our way to bed. 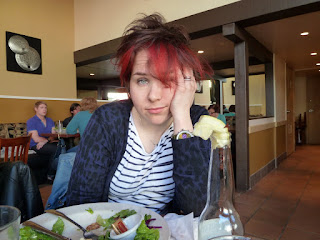 But today is finally the first holiday! Looking forward to some cable car experiences and shopping! Yes!