Visiting Queen Victoria (and How to Marry a Millionaire)

Cunard’s luxurious cruise ship Queen Victoria visited Helsinki today, and Aktiv-Resor had invited me for a visit to have a quick taste of what we will experience in September 2014 on Queen Mary 2.

The invitation was for two, so Miss Heinämaa joined me. Unfortunately the 3rd QM2 traveller Orvokki lives too far away. It was a boiling hot day as we gathered with some other invitees at the gates of Hernesaari harbour and, after leaving our passports, were guided inside. The boat was almost empty. The sunshine had attracted all cruise passengers to visit the city. 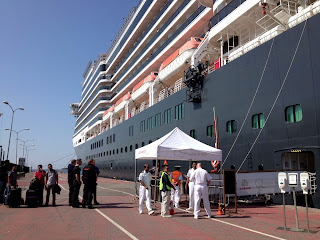 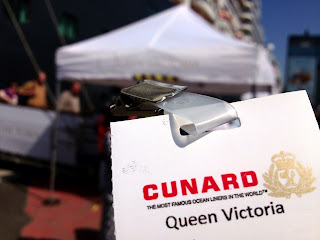 Queen Victoria is based in Southampton and had just arrived from Stockholm. The next port would be St. Petersburg. It is about 1,5 x the size of a Silja Serenade or Symphony (the vessels that cruise between Helsinki and Stockholm) and carries around 2000 passengers and 1000 crew members – a relation that sounds like a good service level. Basically everything except for the drinks is included in the ticket price.
”Our” boat, Queen Mary 2, is even bigger, and according to Markus of Aktiv-Resor, a bit more American when it comes to decoration and kitsch. Alright… I must admit that the decor of Victoria was pretty American already! Or what would you say: 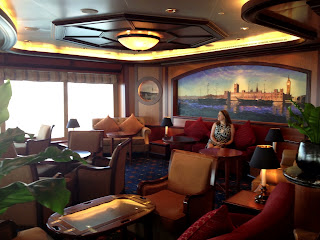 Miss Heinämaa testing the Commodore Club (and probably dreaming about the featured cocktail of the day,  ”The 007 Martini”). The drinks are around £5, so we better follow my godmother’s advice and ”let the men buy”.

When we booked the cruise for 2014, it was hard to pick the right cabin category. Basically it was a choice between packing three grown-ups to a 2-person cabin with a small extra bed, and – according to a Cruise Critic review – you would need to be an acrobat to be able to lay on it. Or you could pay twice as much for a Princess Grill Suite, but you would get a large balcony, better restaurants, butler service and large beds + a comfy sofa bed. We did some serious thinking and opted for the latter. ”We’ll just cut on  shopping for a year and save a bit more.”

After all, on a once in a lifetime cruise you don’t want to think ”next time, we’ll pick a better category”.

Happy to say that based on what we saw today, we made a good choice! The Grill decks seem to be a world of their own. 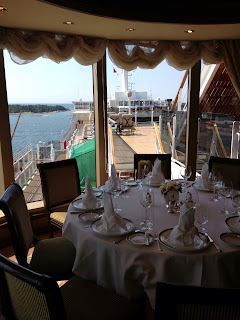 In the Grill restaurant, every table has beautiful sea view. Single seating means that you have more flexible meal times.

The Grill section also had a nice private outdoor area and a private sunbathing section. Most importantly, it also has private cocktail lounge. I’m quite confident that Orvokki will meet her handsome millionaire widow over here: 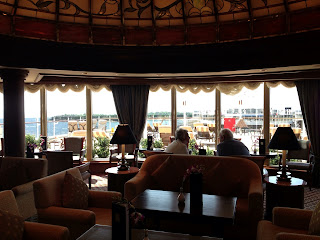 This investment is SO going to pay off in the future, as Orvokki invites us to their ranch or Hamptons beach house! 🙂

Gradually, most of the other visitors overheard or plans, and one friendly lady suggested that we watch the film ”How to Marry a Millioinaire” for some practical tips. Very good advice indeed!

But of course the boat was not only about the Grill decks. We saw the most of it, such as the pool ”for the common people”… 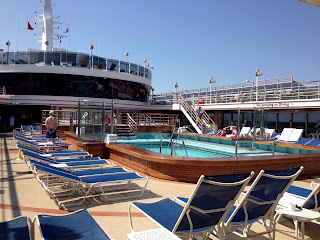 The gym had a spectacular view. They do yoga, pilates, spinning and bootcamp sessions every day. ”Maybe we should come to pilates every morning?” ”Yes, sweat and try to cover a fraction of the food and wine consumption…” 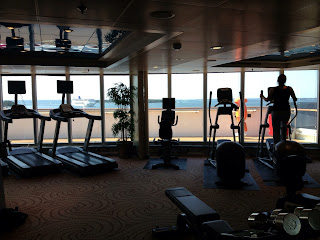 There is even a theatre for shows, movies and expert presentations (which you can watch in you cabin, too). For a show, you can book a box, where you will be served theme drinks, Veuve Cliqcuot and strawberries to dip in chocolate. The Royal box is named after Charles and Camilla, who have visited the vessel. 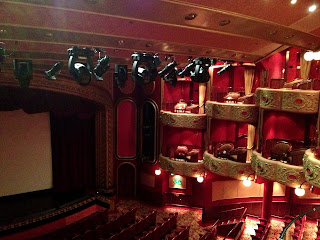 ”Meet me at the clock?!”
(Btw, I think Leonardo Di Caprio is much hotter nowadays than in Titanic, where he looked more like a boy band member.)
These stairs are not located in the dining room but by the shopping arcade. 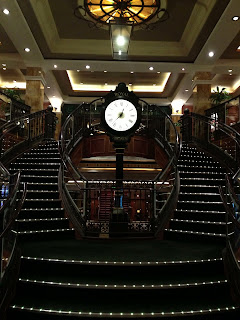 After the tour we were invited to have lunch in Britannia Restaurant, which is the dinner venue for most passengers. It was cleverly designed so that it didn’t look like a gigantic hall, although it was very large. 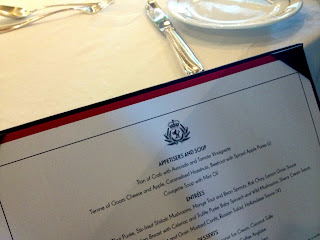 Definitely more luxurious than anything between Helsinki and Stockholm. 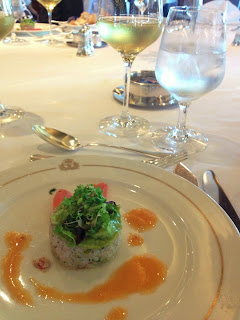 Crab and avocado as a starter… 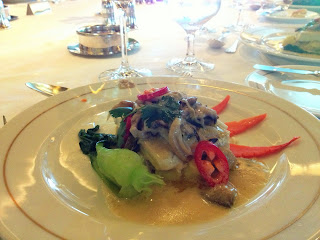 …halibut with mushrooms for entree… 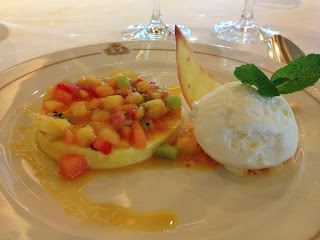 …and delicious passion fruit pannacotta with coconut ice-cream as the perfect finish.

Most of the other visitors of the group were retired, but we had a good time with them. One couple had done Silversea luxury cruises in the Mediterranean, where everything was complimentary, including the champagne and drinks. We discussed that the drinking might actually make our QM2 cruise more expensive than anticipated.

”I heard that you can take a wine bottle with you on board. Maybe we should visit Tallinn for some cheap alcohol first?”
I pointed to the windows, where Tallink Shuttle was just about to leave the harbour.
”Yes, come on board with a beer trolley…”
”Or resort to high school tricks, such as filling a shampoo bottle with vodka!”
”That would be so classy, considering the Princess Grill level! What would our butler think?”
One of the men at the table commented:
”I think you should stick to that other plan. Find the millionaire, who will buy you the drinks.”
Then we all laughed.

Oh my, I went back to the office hoping that the year and three months would go faster.