You might have heard about the ABC people. Anything But Chardonnay, that is. Our bff team was very much abc for years ”siinä on se tympee sivumaku”, but lately this has been questionised.

Viini-lehti (wine magazine) that my mom subscribes for me, explained that most of the abc people don’t hate the grape chardonnay but the taste of oak barrel, which is recognisable in many of the most common chardonnays, e.g. the wine served on planes. (I know that Miss H drinks a way too many bottles of Lufthansa’s chardonnay per year to be a true abc girl. 🙂 In addition, we both love Chablis, which is usually made of chardonnay.

So lately, Orvokki has been the only remaining abc fortress. To her horror, our lovely wine taxi driver Pete told us on Friday morning as we headed to the wine region that Santa Ynez Valley is famous for its chardonnays. ”Luckily I don’t have to drink. I can save money”, she stated persistently as the taxi rolled between the hills towards our first stop, Gainey Vineyard. Miss H and I just smiled. Pete (who’s service we warmly recommend) told us to avoid the cellar tour ”waste of money” but instead taste the Limited Selection Chardonnay 2007.

To make the long story short: we taste seven wines at Gainey and it ended like this: 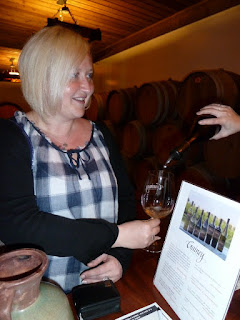 The winery girl: ”Would you like to have more of something?”
Orvokki. ”I could have some more chardonnay, that was really good!”
It was. Tasted a bit like honey and fruits in a smooth and velvety way.

We visited three more wineries: French-oriented Rideau, ”wannabe German” (as Miss H stated) Koehler and Buttonwood, a small family farm that got our sympathies. We could have enjoyed their rosé and ”port” wine (named Posh) for hours. Well, we actually stayed in their garden for over an hour. We were alone and the sun was shining. What a tranquility. 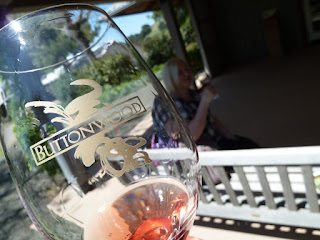 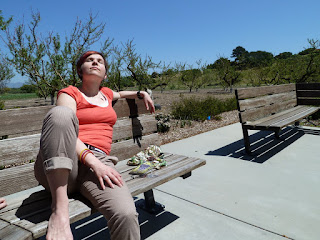 ”Who’sturn is it to get a refill? I don’t have shoes on my feet…”

It was not only about drinking! We had a fantastic lunch in Café Los olivos (also featured in Sideways the movie). Their olive oil with herbs was impeccable and the salads were so fresh! Once again: it’s so amazing how good a simple meal can be if the ingredients are top class! 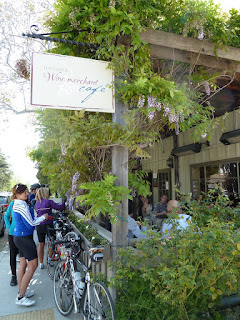 95 % of the people in Los Olivos are tourists. According to Pete, Sideways affected the tourism in the region a lot. An interesting place nearby is Solvang, the Danish village, where you can enjoy Danish smörrebröd and buy H.C. Andersen’s story books.”The front is very Danish, but it’s José in the back that does all the work”, laughed Pete. So we skipped that. 🙂

Our last stop was Koehler’s and their famous riesling (equally interesting was the main building, designed by Frank Lloyd Wright, but unfortunately that was private! So we just enjoyed the picnic area).
”I actually liked the chardonnays the most”, said Orvokki. 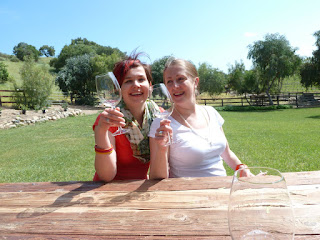 We celebrated. The abc girl is a memory of the past.
”Good that you didn’t add ”abc” letters to your ”bff” tattoo”, Miss H and I pointed out.
”Now you could add for instance ”cyp”, chardonnay yes please”, I suggested.
Orvokki laughed.

The day had been perfect, and after returning to the hotel, we continued on our patio with some local sauvignon blanc. But we bought a bottle of the 2007 Gainey chardonnay. To be enjoyed later. Maybe when watching the sunset in Grand Canyon…