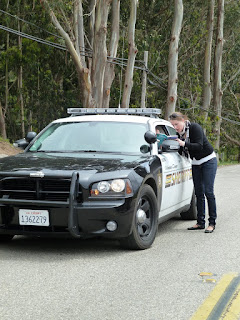 The Monterey sheriff tells Miss H that the Highway 1 is closed and there’s no way we can make it to Big Sur. ”Maybe we should have watched news instead of Frasier in the morning”, said Orvokki.

So, after 30 miles south we took an u-turn back to Monterey and then to the east, to Salinas and via the ”hillybilly countryside” to the wine district (’Rotta winery’ – how tempting…) and finally to Cambria by the ocean. The Lonely Planet told us that Cambria is the gold digger coast: a number of old, wealthy people. We saw a chance for Orvokki and checked in to the lovely and comfy Blue Dolphin Inn by the ocean boulevard, Moonstone Drive. Unfortunately there were mostly couples and no prospects on sight. (Orvokki doesn’t seem to mind, but Miss H and I area bit disappointed. We had high hopes related to our future holidays, enjoying Orvokki’s and her hubby’s hacienda on the Californian coast…)

Anyway, the ocean!! We walked on the beach — and the sound, the smell, the feeling… It reminds us of the spring 2001 in Aberystwyth, Wales, where we met for the first time. We spent almost every night of May 2001 by the oceanfront on Victoria Terrace in Aber chatting, laughing and disturbing the other students who had their final exams. 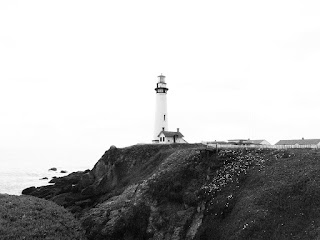 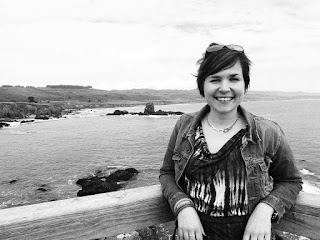 The Pigeon point near Pescadera. This lighthouse has been in several tv series and posters! 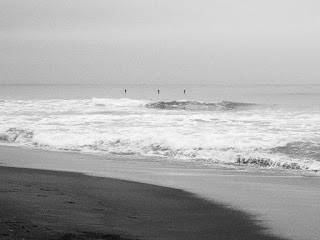 The wakeboarders of Cambria. 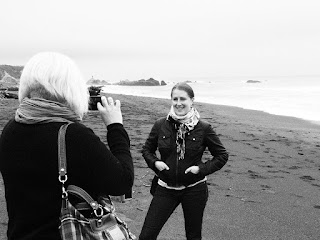 We had our photo session on the dry land. And after that some seafood and and sauvinon blanc from Paso Robles, the city we passed during our trip today.

← ”Thelma and Louise didn’t have a GPS either!”